01
I was playing the game Inside last night, I'd completed it a couple of times and really enjoyed it, but for some reason I found particular moments stunning that I hadn't considered before. I think the materials of the objects are very simple, but the lighting looks realistic.
It reminded me of pixar movies, in the way objects are cartoonish and very smooth, but the lighting is totally real. 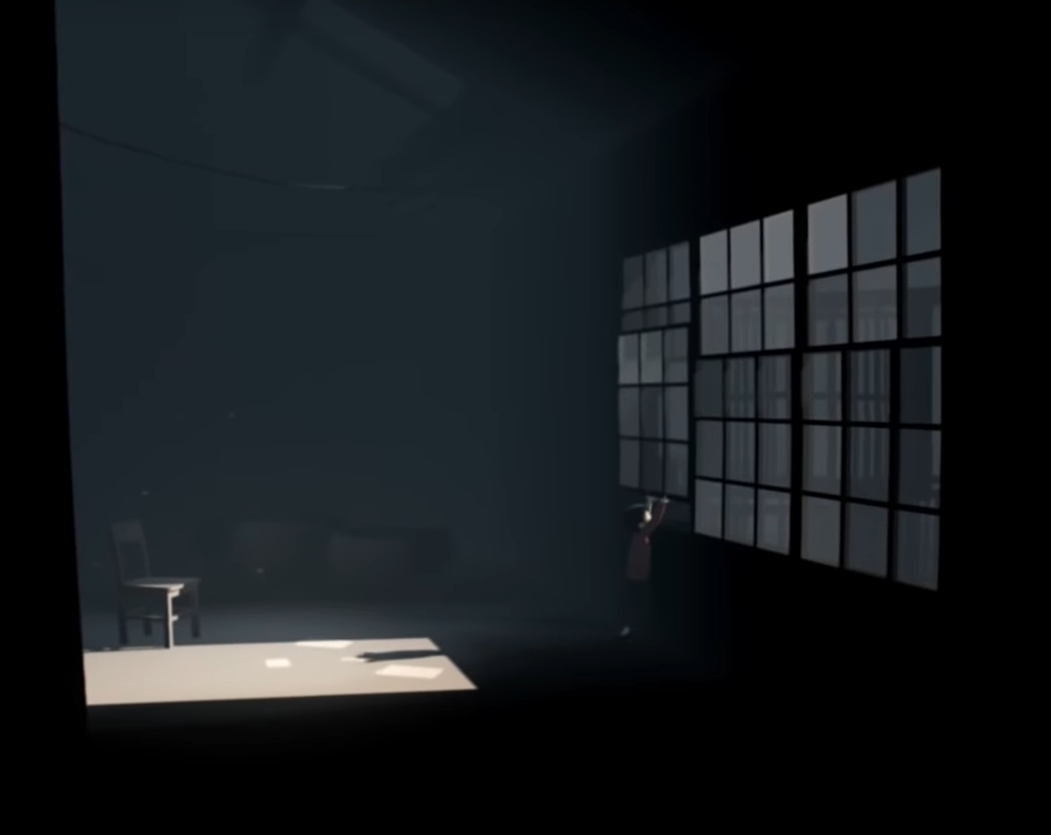 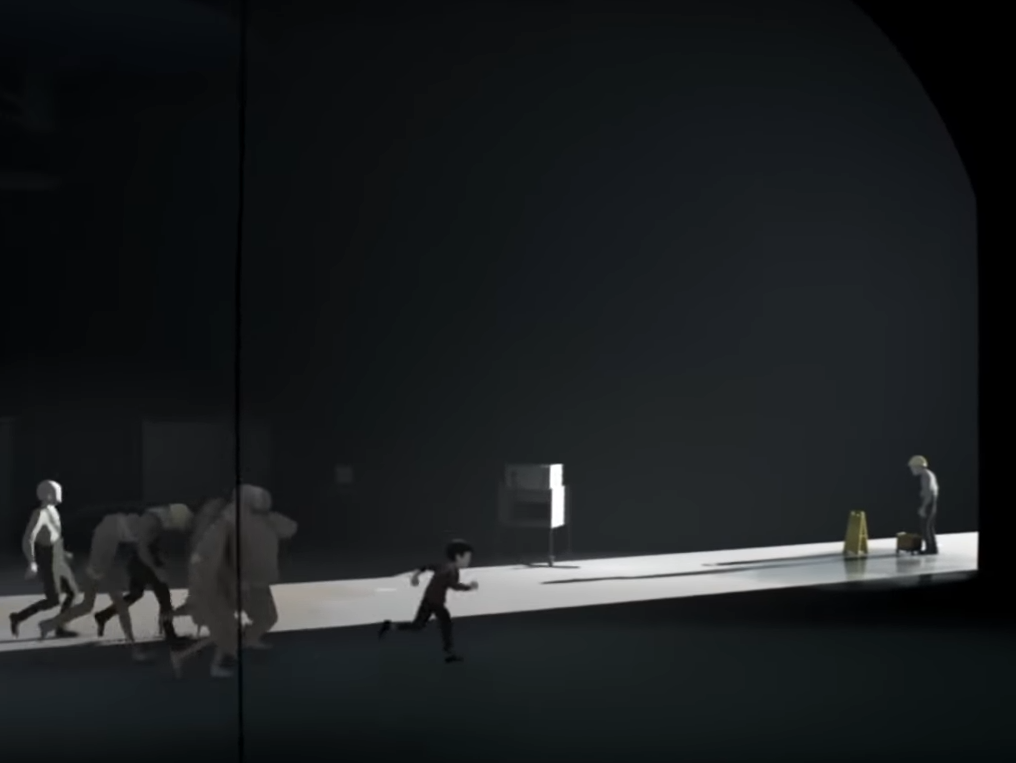 But aside from the shading, I was taken aback by the sense of scale in this game. I don't think the images do it justice, but there's moments in this game where the space just feels collosal. Its a similar feeling to being at the foot of or on top of a mountain. The scale just triggers some weird animal switch in my head that completely amazes me. 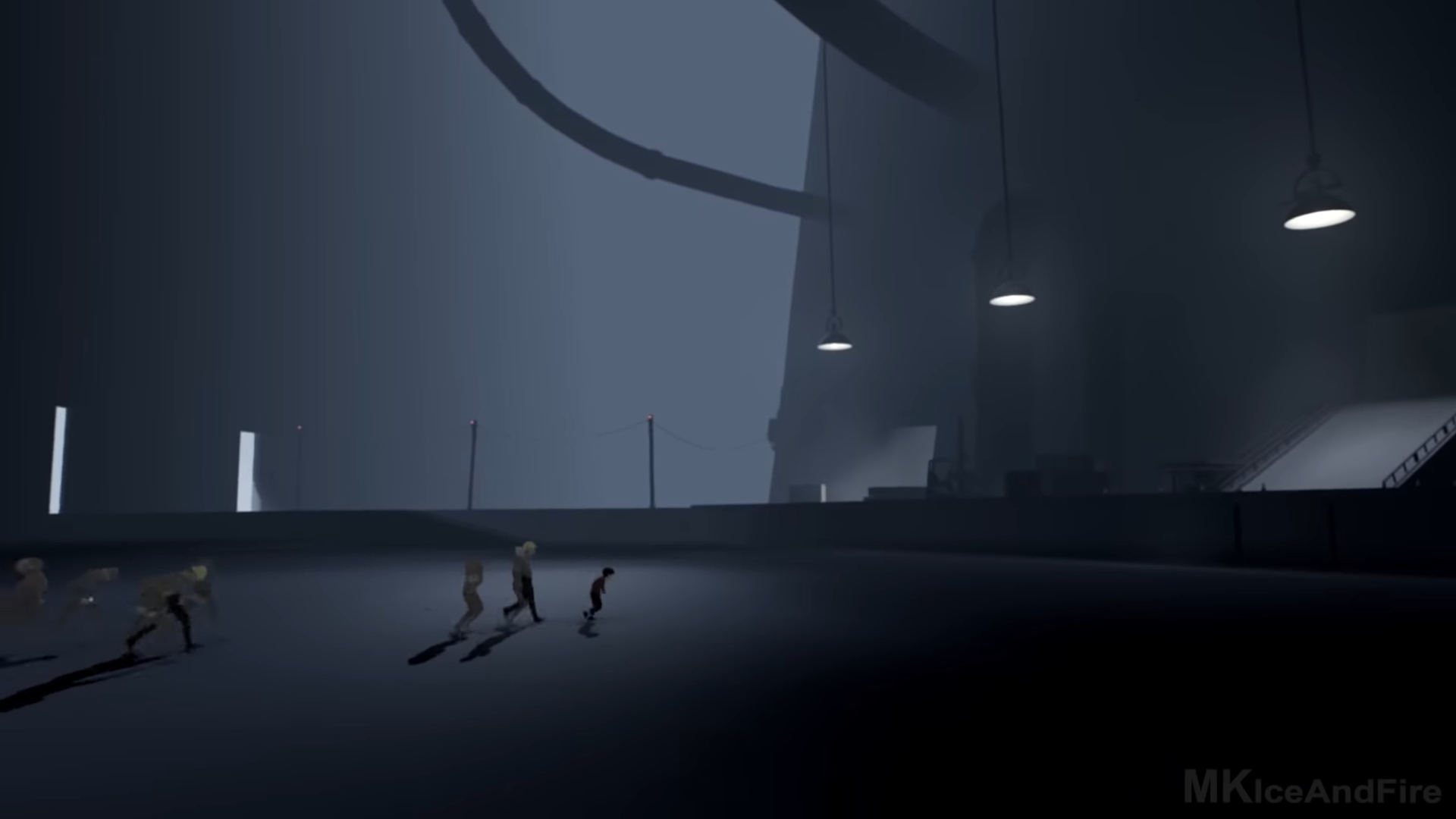 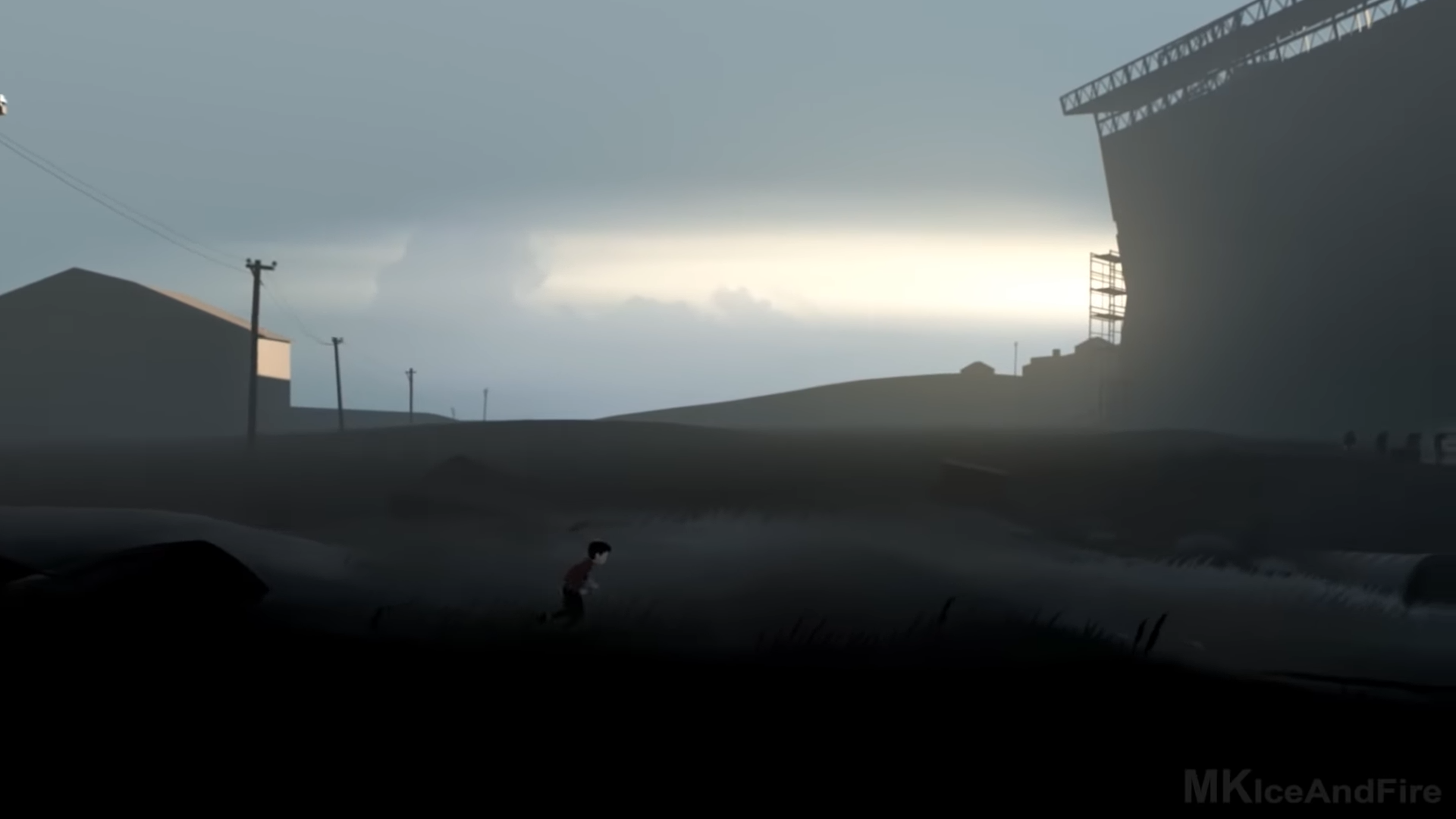 I started thinking that this is a really powerful device that I feel digital media rarely utilises well. Virtual environments are not limited by the laws of physics. In Unity I have unlimited material, and I can build it larger than I can imagine. I think it would be interesting to bring this into my project. I huge expanse, possibly at the end?
Anyway, I began blocking out the scene within the mountain. I am currently just trying to feel out a possible structure for it. I think it would be interesting to bring the walls in close the audience, make them claustrophobic and then expand outwards into a strange scene. Perhaps it's a wedding in a cathedral? I don't know yet.
02
I continued the work from yesterday. This part of the experience began to take the shape of a cathedral, and the audience walk down an extremely long aisle.

Timelapse of the building process

03
I spent today updating the shaders. I realised that my shader can only calculate one light source. This was fine when the scene was outdoors, but it is going to cause trouble in enclosed scenes.
The first thing I did was a adjust the banding of light on the shader. I thought there were too many bands and the shadow was too dark, but thankfully I could just open the light ramp in photoshop and each time I saved I could see it update live in Unity.
I then followed a portion of this official unity tutorial. It pretty much just includes the code for getting additional lighting data. The diffuse and specular data from the main light and the additional lights is then added together and produces a shader that can recieve multiple sources.

I was starting to find the plain toon shader a bit boring. I thought it would be interesting to give the shading a bit of texture. I had no idea what to search to find this kind of shader so I had to just play about until I found something that worked.
In the end, I discovered that if I took some kind of procedural noise, and limited the high and low ranges so it would only affect transitional light on the shader, I would get quite a nice effect.

04
Today I added some extra touches to the layout of the experience. I fixed issues with the started animation, connected the the start of the tunnel with the beginning of the cathedral area. I also added a trigger that creates an opening at the end of the cathedral to progress to the next stage.
I'm hoping to have an entire start-to-finish narrative blocked out by the end of the week, and then I can start work at a higher level of detail.
08
I have been thinking more about how the environment relates to reification. And it is is a bit flimsy. I do however find the work I have done so far helpful in working things out, but I should probably begin to mould it into something better.
The first area, was intended to be a representation of infancy. I used the the symbol of water to represent birth and christening. The currents as the lack of agency and control over one's life. However, the environment doesn't feel like it is necessary, the river and the mountain are just an easy natural environment.
I had a look into maternal symbols and symbols of birth. I have referenced it a couple of times, but I think I may need to associate myself with the work even more closely, but Freud's Interpretation of Dreams contains references to this sort of thing. Birth is often represented by being in water, or being rescued from water. Parents are often represented by powerful beings, authoritative figures.
I started looking into commodities that prey upon maternal comfort. I came up with two areas that rely on this: Childrens TV programming and food- particularly sweets.
Cereal is (for the most part) marketed towards children. It is also heavily advertised and branded with many familiar mascots. I am thinking that perhaps I can adapt the river scene to be a bowl of cereal.
The audience are christened in a bowl of cereal. The mascot guides the audience to a place of safety and takes on the motherly role of feeding, educating and protecting the subject. The audience are then guided out of the serial bowl by washing up on to a desert spoon, which leads them into the next area.
09
I am just going to carry out the bowl of ceral idea. It makes more sense with my theory, it is more interesting, and provides a more meaningful and dynamic experience. I made a quick sketch in Unity...

I am thinking the player can row along a path in the cereal. Maybe they are floating on a piece of cereal, or maybe they are floating on the brand mascot. The mascot directs the player, maybe audibly? or maybe its just through subtitles.
There can be dynamic pieces of cereal that interact with the raft as it passes. I may as well just get to work on it.
I realised I still had old code running where I tried to make the cereal scale randomly. I preffered manually placing the cereal so I went back in and placed in prefabs of three different sizes. All of which have an animation where they bob up and down in the milk.

The Interpretation of Dreams Notes
"However strange the dream may seem, it can never detach itself from reality". I will assume reality to be the lucid experience of the subject, rather than objective reality. It is interesting to consider the dream does not conjure up any concepts that do not already exist in the subject's mind.
It is often the case that dream content can not be recognised in a lucid state. However, the source of the content is in the mind, it may just not be obvious to the dreamer.
"stress is laid not only on the most significant, but also on the most indifferent and superficial reminiscences." Important life events rarely appear in the dream content, instead minute details from experience tend to appear frequently.
10
I started today with a 1:1 tutorial with Gillian. Things seem to be going well, but I need to find a better way to represent my ideas. The ceral idea makes sense when I explain it, but there is something off with it. I think it may be that it is surreal without context, so it just appears nonsensical. However, Gillian encouraged me to keep going with it, and it may spur on ideas that work better. I think this is a good idea, as I have felt so rigid working before this, and I think this is a good way to loosen my work.
Gillian also suggested that I may find inspiration in slighly surreal films. I think this would make a good approach, it just may take me a little while to find a film that fits the tone I am going for.
11
I decided to keep going with the cereal bowl and just see how things go. I started to work on the movement of the raft floating on the milk. I decided I would use a rigidbody and apply a force in the forward direction. The 'a' and 'd' keys apply a torque clockwise and anti-clockwise so the player can move freely.
I wanted to make the movement feel like you were rowing a boat, so the player would have to hold down a button to perform one row, and then let the paddles return to the starting point before they can row again sort of like this clip from Assassin's Creed 2:
However, I am beginning to think the such a drastic change in controls from moving and looking around before may be a bit unsettling for the audience. It may be best to keep the movement to a WASD/ analog stick but make it more 'floaty'.
16
I spent Thursday and Friday last week on DHT as I have a deadline for 5000 words coming up and I'm trying to get around 1000 words/ week to meet it. I also took the weekend off after that but I think it made me far more productive today.
I had been thinking about my project and I realised it may be a good idea to have a sort of central hub where the player begins and returns to at the end of each section. This could act as a glue to hold the narrative together, and give each of the objects a bit of context.
Central hubs used to be very common in old games. Mario 64 uses the castle as a recurring area from which the player can move to other levels. This provides the areas with context and makes the transition between such different themes less unsettling.
I don't want my central hub to be as obvious as this but it effectively fills the same need.
I want to have a wake, where there is an empty room with a coffin. The coffin is covered in flowers, maybe some cards and images. But three objects sit on top of the coffin. Interacting with these objects reveals a doorway behind the player. Walking through this doorway takes the player into the environment that explores the aura of the objects.
For example, a cuddly toy sits on top of the wake, an object from the protagonists youth. The aura is explored and it is revealed that the object is a toy from a cereal box. In its aura, the toy contains the relation between the protagonist and their mother and the environment is a reflection of maternal comfort. There are no direct references to any real relationship, however.
The player would then return to the central hub, the first object is greyed out and the next one is selectable. There are some slight differences to the wake scene.
I jumped in to developing this scene in Unity. I ran into very few problems and after a days work I have a decent mock up of a how the wake scene will work. Below is a timelapse, some sketchbook work and a playthrough.